Wasting No Energy Getting Up to Speed 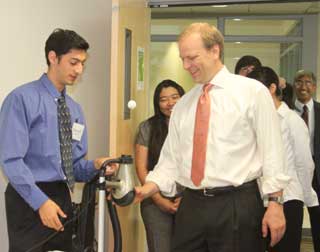 McAllister tests out his skills in the 1kw Hour Challenge

Less than three months on the job and the newest California Energy Commissioner is already familiarizing himself with who’s doing what in the area of energy efficiency. In May, Andrew McAllister was appointed to one of five state energy commission seats; in July, he paid a visit to UC Irvine to learn more about the efforts underway at the California Plug Load Research Center (CalPlug).

The center, which opened a year ago in the Calit2 Building, received an initial $1 million in research funding from the Commission, specifically targeting energy efficiency use and design in appliances and consumer electronic devices.

“With the proliferation of individualized devices, the amount of items families plug into their home outlets has gone from an average of ten per household a decade ago to 25 to 40 today,” explained G.P. Li, CalPlug director. “We are anticipating significant increases in personalized energy footprints so CalPlug is taking a holistic approach in dealing with plug-load efficiency through research, demonstration and education.”

Li provided a brief overview of CalPlug’s mission to McAllister, who was joined by Brad Meister, senior engineer from the Commission’s energy efficiency research program. In addition to Li, the guests also learned a bit about UCI’s campus commitment to constructing and renovating the most energy-efficient, smart “green” buildings and facilities from Wendell Brase, vice chancellor for administrative and business services, and a CalPlug advisory board member.

“In the past two years, UCI placed sixth in Sierra magazine’s annual ranking of the greenest and most sustainable colleges and universities in the United States,” Brase told the group.

McAllister is no stranger to the study of energy efficiency with more than 20 years of technical, programmatic and policy experience in energy management and renewable generation. Given his expertise, he has been charged as one of the primary commissioners for the efficiency committee.

“As part of my graduate work in the 90s, I actually studied plug load device usage in the Bay area,” said McAllister. “But significant changes have occurred since then and I am anxious to learn more about what the current research efforts entail.”

McAllister was pleased to see the industry participation early in the center’s work. “Hopefully these centers supported by the energy commission make it comfortable for industry to work alongside policy-makers and academia in quest for efficiency solutions.”

One of the first plug-load devices CalPlug is addressing is to improve the energy efficiency of set-top boxes that bring cable or satellite television into the home. Whether or not these boxes are in use, they operate at near-full power 24/7; in fact, two-thirds of their energy usage occurs while they are off.

Set-top box research efforts include measuring the power consumption of a variety of boxes and developing design alternatives to reduce energy use. One possibility that is being prototyped and demonstrated at the Center is an intelligent sleep mode that has presence-awareness capabilities.

After viewing all of the demonstrations, the Commissioner McAllister expressed enthusiasm for the direction the center is taking. “We are very much looking forward to gaining valuable insights from your set-top box research,” he said. “This is exactly the sort of policy relevant and technically challenging topic that we need CalPlug to take on.”

Other recent noteworthy visits to the CalPlug Center included Nish Acharya, director of innovation and entrepreneurship, and senior advisor to the U.S. secretary of commerce; and a group from the Los Angeles Department of Water and Power. 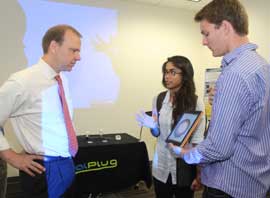 The commissioner learns about WOTZ, an energy feedback app 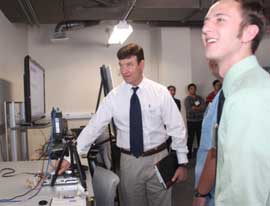 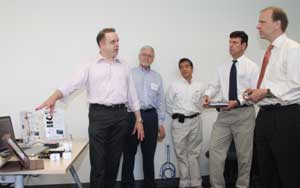